Adding a second spillway to New Bullards Bar Dam will bring a significant reduction in flood risk and great enhancements to dam safety for Yuba and Sutter counties.

Yuba Water Agency is currently in the design process for the Atmospheric River Control (ARC) Spillway, with estimates showing it is likely to cost approximately $225 million.

What really makes this new spillway have such huge flood risk reduction benefits is that its gates will be 31.5 feet lower than the existing spillway gates. With the gates at a much lower elevation on the dam, Yuba Water will be able to release up to 35,000 cubic feet of water per second in advance of large, threatening storm events, when there is enough downstream channel capacity to handle the flows. That will free up space in the reservoir to hold back peak flows when the biggest part of the storm arrives. 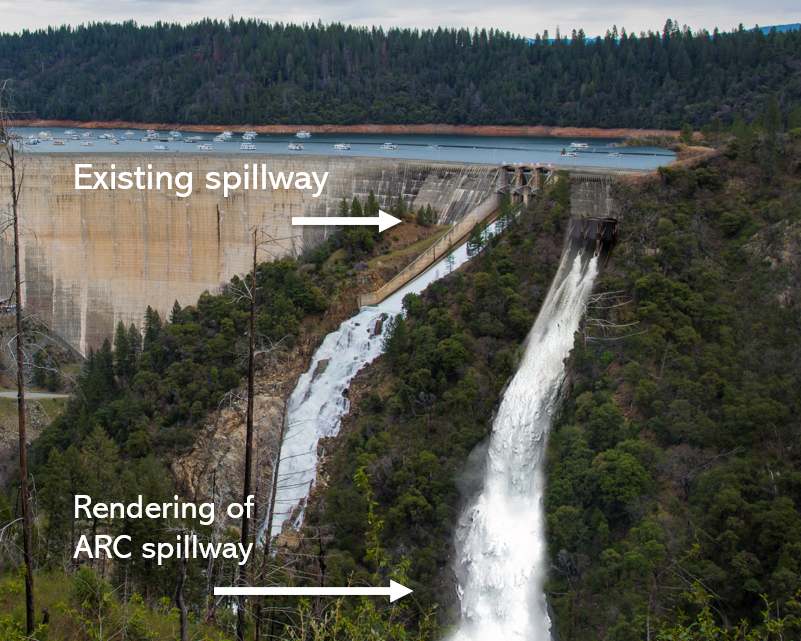 will decrease flood risk downstream for approximately 100,000 residents of Marysville, Linda, Olivehurst, Plumas Lake and Yuba City. In fact, it’s expected this improvement in flexibility and control of dam releases will reduce the water level on levees near Marysville by up to two feet in a storm event like what this region experienced in 1997. The lower river levels would result in less stress on the levees, and a reduced risk for our communities.

Another advantage of the planned ARC spillway is the redundancy of an alternate for water releases in case a problem arises with the primary spillway. This region learned all too well during the state’s Oroville Dam spillway crisis that an alternative release option is critical. The second spillway at Bullards would, on its own, be able to handle releases for a 1997-sized storm.

Yuba Water already coordinates releases during significant storms with the Department of Water Resources Flood Operations Center, as well as their Oroville Dam Operations, the National Weather Service and the U.S. Army Corps of Engineers (USACE) in an effort to minimize impacts downstream. To maximize the benefit of the second spillway, Yuba Water will take that program to the next level, working with USACE to develop new manuals for guiding the operation of the dam, implementing forecast-informed reservoir operations for New Bullards Bar.

Yuba Water is now working with a team of engineers to bring the project to a 90 percent design phase and is exploring potential partners to collaborate on this important multi-benefit project. Construction on the new spillway is expected to take three to four years. Both the cost and schedule are rough estimates at this time, but are expected to be much more clearly defined as the project is further designed. The agency is currently exploring additional funding partners for this critical project.

News coverage about the second spillway